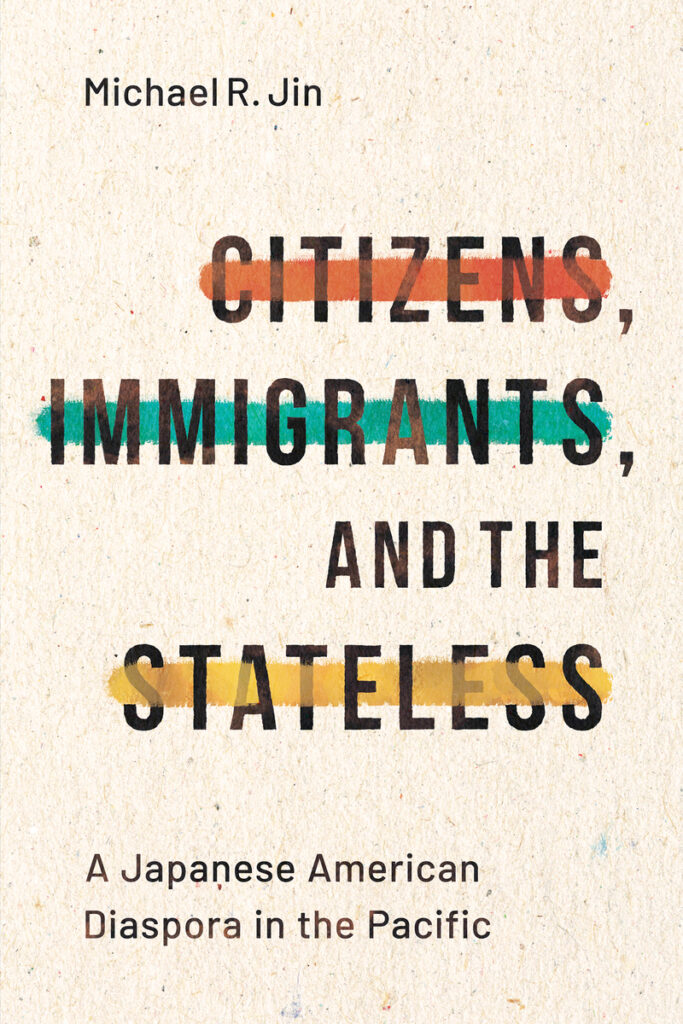 You can receive a 20% discount when you order directly from Stanford University Press with DISCOUNT CODE JIN20.

“For far too long, Nisei with life experiences in Japan have been written out of Japanese American history. Michael R. Jin rescues them from the historical oblivion perpetuated by the nationalist narrative of singular loyalty. Based on in-depth bilingual research, Citizens, Immigrants, and the Stateless gives much deserved complexities to the experiences of forgotten Nisei beyond the label of ‘disloyal’ or helpless victims. A transnational history at its best!”

Eiichiro Azuma, author of In Search of Our Frontier: Japanese America and Settler Colonialism in the Construction of Japan’s Borderless Empire

“Michael R. Jin has transformed Nisei transnationalism from anecdote to experience. This is an impressive achievement.”

During the era of intense Asian exclusion in the United States in the first half of the twentieth century, more than 50,000 young second-generation Japanese Americans (Nisei) embarked on transpacific journeys to the Japanese Empire, putting an ocean between themselves and pervasive anti-Asian racism in the American West. Born U.S citizens but treated as unwelcome aliens, this large contingent of Japanese Americans— one in four U.S.-born Nisei—came in search of better lives but instead encountered a world shaped by increasingly volatile U.S.-Japan relations.

Based on bilingual research in the United States and Japan, Michael R. Jin recuperates the stories of these American emigrants at the crossroads of U.S. and Japanese empires before, during, and after World War II. From the Jim Crow American West to the Japanese colonial frontiers in Asia, from a coastal village in southern Kyushu to the cityscape of Tokyo, and from internment camps in America to Hiroshima on the eve of the atomic bombing, Nisei migrants redefined ideas about home, identity, citizenship, and belonging as they encountered multiple social realities on both sides of the Pacific. Citizens, Immigrants, and the Stateless amines the deeply intertwined histories of Asian exclusion in the United States, Japanese colonialism in Asia, and volatile geopolitical changes in the Pacific world that converged in the lives of Nisei workers, students, sojourners, and survivors of the war in the U.S.-Japan borderlands.

Please let me know if you are considering Citizens, Immigrants, and the Stateless for course adoption. I would love to discuss the possibility of Zooming into your classroom to talk about the book with your students.